One of the largest Media Conglomerates in India, Patrika Group is known for its journalistic values and high credibility. Aptly called the ‘newspaper with a soul’, Rajasthan Patrika was started 65 years ago.

It is read by more than 25.9 million readers across India. Rajasthan Patrika is also amongst the top three most trusted newspapers (as per BBC-Reuters survey). It also stands amongst country’s five community newspapers, as per AMIC UNESCO. Forbes describes it as ‘Keeping readers above advertisers’. The ‘New York Times describes it as ‘Civic-minded hyper-local with large circulation.’ Wharton University article describes it as ‘Publishing House with PAN India presence.’ Patrika Group has reached 9 states, with 38 editions. Covering 50% of India’s Hindi Heartland, the Patrika Group has marked its presence in almost every region of India with Rajasthan Patrika being the only Hindi daily to effectively cover the Southern parts of India.

PATRIKA EDITORIAL Rajasthan Patrika Group is a renowned name in today’s world of Media. While keeping the flag high with journalistic values, the group has been setting a benchmark in its quality and analytical reportage on varied subjects. Known for its prestigious reputation, PATRIKA is not just a Newspaper; it is working as an institution par excellence.

Mr. Gulab Kothari, Chairman, Rajasthan Patrika was honoured by Raja Ram Mohan Roy Award for outstanding contribution in Journalism by the Press Council of India. He was also bestowed with Ramnath Goenka Excellence in Journalism Award for his powerful editorial work in favour of Freedom of Press.

PATRIKA TV Patrika TV is a 24X7 Satellite Hindi News channel that has the same credibility, analysis and in-depth reporting standards as Patrika has shown with variety in its reportage. It has reached 7 Crore readers in Rajasthan with its one-stop destination Patrika TV through Mobile & TV platforms.

Whereas Patrika through its ’Multiple Digital Platforms’ including the Web, Wap and Apps has registered 130.6 million Page Views engaging more than 43.4 million Unique Visitors from across the world (Source - GA Aug'21).

Catch is a contemporary digital news platform about the ideas and events shaping the world.

It aims to filter and provide news-on-the-run for an impatient new generation while offering context and insight for influencers and the deeper consumer of news.

Within a span of 3 years of its launch, Catch News achieved a milestone by growing over 3000% with a monthly user base of over 2.6 Million users.

Currently as per source - ’Similar Web’, 73% of the website’s traffic is from organic and direct sources. (Source - GA Aug'21)

PATRIKA EVENTS It has conducted more than 1500 Domestic and International Mega Events ranging from exhibitions to Public Shows, Rural Activations to Tailor-made BTL initiatives, pioneering in conceptualizing and executing consumer trade fairs. With 4 mentions in the Limca Book of Records, it has reached 80+ cities, 60 lac+ visitors by executing 100+ exhibitions per year and delivering 800+ on ground days. 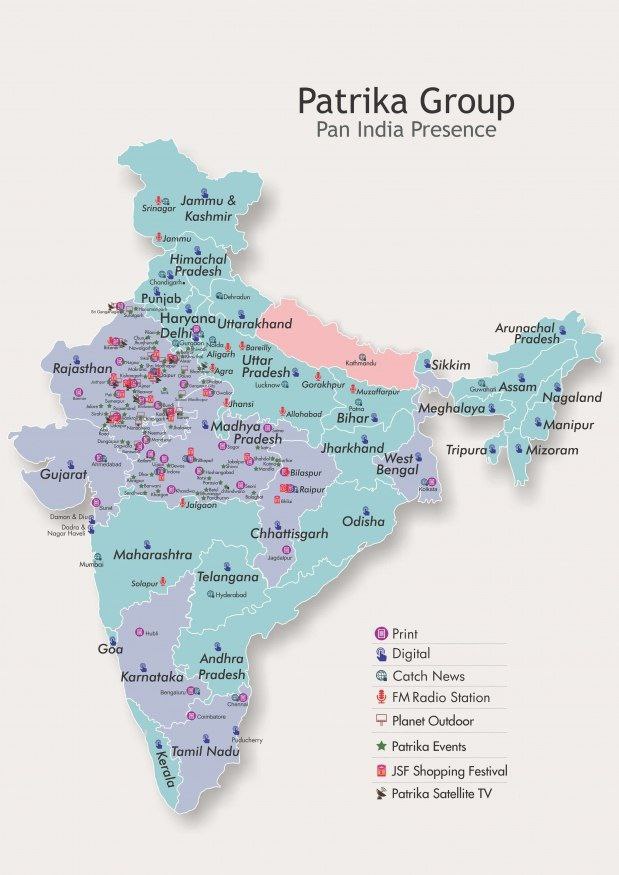